Experiencing psychosis, such as schizophrenia or schizoaffective disorder may include hearing or seeing things that may not be present.

Schizophrenia is a brain disorder that results in hallucinations and delusions where many individuals have trouble interpreting reality. Schizophrenia requires life-long treatment, however, most symptoms will most likely decrease with suitable treatment.

Schizoaffective disorder is a rare disorder that includes symptoms of both schizophrenia (ex. delusions or hallucinations) and mood disorder (ex. depression).

There can be several factors that contribute to the onset of schizophrenia such as environmental (ex. stress), psychological and genetic factors. This disorder is most often found in young men and women and uncommonly found in children as well as older adults.

Common symptoms of schizophrenia include:

Depressive episodes are characterized by:

Schizoaffective disorder can cause individuals to have trouble with:

Even though this is a rare disorder, the symptoms are present during adolescence or young adulthood. There are combinations of causes that contribute to this disorder, such as genetics (a family member was diagnosed), stress (stressful life events such as the death of a family member), and drug use (psychoactive drugs can worsen symptoms).

Schizotypal personality disorder is also commonly linked to schizophrenia. This disorder is characterized by difficulty forming relationships and having trouble in most social interactions. Individuals will tend to avoid social situations and have distorted perceptions of reality.

What is Bipolar Disorder?

Bipolar disorder interferes with an individual's energy, ability to function, sleep, and judgment. Mood episodes vary with the time they occur, for example, they may occur a few times a year or several times a month. While some exhibit emotional symptoms between episodes, others can also have a duration of a neutral mood. Similar to schizoaffective disorder, there are many causes such as genetic, environmental, and biological differences that lead to bipolar disorder. An example of a genetic factor is a close relative being diagnosed, while an environmental factor can be stress or substance abuse that can worsen mood episodes. Changes in brain structure and functioning can be a cause as well.

Bipolar disorder is often linked to other disorders as well such as anxiety disorder, attention-deficit/hyperactivity disorder (ADHD), and substance abuse disorders. Symptoms of this disorder can be managed with a treatment plan, which is usually treated by psychotherapy and medication.

Symptoms of bipolar disorder may include: 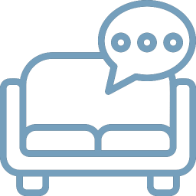 We treat psychosis and bipolar disorder using cognitive behavioural therapy (CBT) and compassion focused therapy (CFT). We also encourage those experiencing symptoms of psychosis or bipolar disorder to be connected for support to a primary health care provider as medication often plays an important role in recovery in addition to psychotherapy.

Cognitive behavioural therapy (CBT) is a goal-oriented type of therapy that teaches the client how to first recognize and then change unhealthy ways of thinking and behaving. With the use of in-session practice and homework of skills to work on between sessions, this treatment is tailored to fit the client's goals and is a highly evidence-based collaborative psychotherapy.

Compassion focused therapy (CFT) is a type of psychotherapy that encourages individuals to be compassionate toward others as well as themselves. This type of therapy is primarily used for clients that struggle with self-criticism and self-contempt. CFT often includes exercises to practice mindfulness and appreciation. Sessions focus on examining the ways we talk to ourselves, where we might have first developed the particular tone and word choices used, and how we can make changes to how we speak to ourselves to increase self-compassion and appreciation.

To request an appointment, please fill out your information using our secure form below and we will be in touch shortly. For more information, please contact us by phone or email: 705-929-1612 ext.6, [email protected].